Meet members of our school football team. Football club takes place on Tuesday evening between 3.15 and 4.15 and has been well attended by boys and girls from year 5 and 6.

The first tournament was the Newport County sponsored EFL competition  on Thursday 3rd October at Cwmbran Stadium. Following some excellent performances in our group Henllys A progressed to the Quarter finals where we played Nant Celyn. A closely contested game ended 1:1 after extra time, but unfortunately Henllys lost on Penalties. I would like to congratulate all members of the squad on the way they played and represented the school. 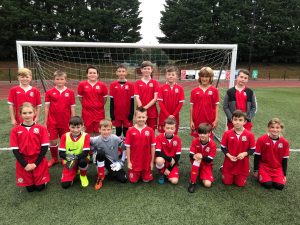 We took a very inexperienced team to the Urdd tournament with no real expectation of how we would perform. However with great leadership from our year 6 girls, the younger girls grew quickly into the tournament.

We completed the group stages with a perfect record, played 5 won 5, so we progressed to the Semi finals. After a very tense and exciting match we qualified for the final. The final was a very close game, but unfortunately Henllys lost 1:0.

All the girls were amazing and we were all very proud of your achievement.